Anyone who tells you s/he never lies is telling you a whopper. And the same can be said for anyone who says s/he always tells the truth. This is not a criticism. It just seems to me that whereas telling the 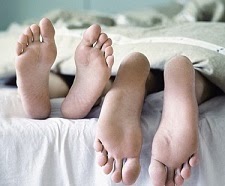 truth -- being open and above-board and (in one of the much-loved words du jour) transparent -- is a social talent worth nurturing, it is more a goal than a practice.

Truth is the goal, lying is the practice.

And who would know better than someone who sits down and writes each morning?

In a social sense, telling the truth is a better course -- healthier and less freighting, but the inevitable moment arrives when, truth be told, everyone shoulders the burden... the time when the truth is too cruel or the price to pay for telling it is too daunting.

But in another sense, I think, truth and lies are like some married couple that checks into a cheap motel where the double bed sags towards the middle and the two are forced by gravity to roll towards an inescapable near-and-dearness.

What brought this mental chewing gum to mind was rereading "The Cucumber Sage," a bit of Zen Buddhist story-telling that is, as far as I know, entirely fabricated. The writing did not delight me as much last night as it had at earlier readings, but it had little jets of light that made it worth the price of admission. This time around, it seemed a bit thread-bare in its coy imitations, but ... well ... so what? It still had the power to engage my mind with laughter and enjoyment and agreement. Is a lie well-told so very different -- or different at all -- from the truth? Did it really matter that the tale was woven of whole-cloth when some clearer truth evolved from it?

Is a lie that tells some truth any longer a lie?

And similarly, is a truth that tells a lie any longer the truth? Suppose (to remain in the realm of Buddhism) that the entire tale of Gautama (the person often referred to as the Buddha) were entirely fabricated -- that it were just the confection of some self-serving entity? Would this change the pointed and appropriate observations of the Buddha's teaching? If some chicken farmer were to issue similar teachings, would it affect the aptness of the teachings themselves, whether in part or in whole?

The old married couple of lies and truths sag together on the cheap-motel mattress. Their sleep is restless and fitful as each may reach out for a more serene and un-nagged realm of peace... my side of the bed. Who wouldn't give a lot to sleep undisturbed?

And perhaps it was with the cheap-motel mattress in mind that the Zen teacher Rinzai once observed, "Grasp and use, but never name."

Was he telling the truth or was he lying?

Who knows if he slept well?