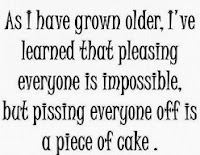 In other times, the wry question was sometimes asked of those who seemed to be too full of themselves, "Who died and left you in charge?" Although the question was generally directed at the bossy and over-inflated, I think there may be a wider usefulness ... as for example, in the bathroom mirror.

Who died and left you in charge?

Mothers, fathers, sisters, brothers, friends and enemies -- all die and leave a vacuum in their wake, a sorrow or sometimes joy provided to the mental tapestry of anyone's life. Once they were there to bolster or outrage or love or hate. Now the support mechanism is somehow withdrawn and they have moved out of state or died and the personal tapestry is less assured: Who died and left you in charge?

When the question is initially asked, I think the focus may be on death or absence or loss and the fear that that can provoke. But later, perhaps, what is more spooky is the recognition that you are and always were in charge and ... well, what the fuck does that mean? If everything dies or shapeshifts or moves out of state in every moment of every day, who is it who is in charge and what, precisely, is s/he in charge of?

This is not a question I am about to beat like some dead horse. I can apply Zen Buddhist templates or philosophical explications or Chinese fortune cookies, but the question, assuming it is asked at all, is as personal as it may be vexing. Were I to attempt these heights and depths, the question might rightly be laid at my doorstep:

Who died and left you in charge?
Posted by genkaku at 7:11 AM