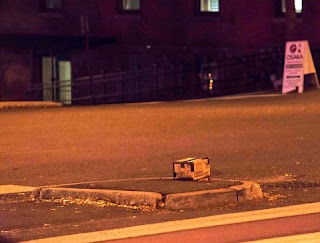 The main street of downtown Northampton (appropriately called "Main Street") was closed to both pedestrian and vehicular traffic yesterday evening while police and bomb squad units investigated "several" suspicious packages that were subsequently deemed to be harmless.

The investigation as reported raised as many questions as it answered, but news outlets are no longer equipped/staffed to cover breaking news. Four or five packages were found; all were said by police to be related to an unspecified "school project;" no one was reported hurt. Closed after 7 p.m., Main Street reopened shortly after 9.

My wife said that if the boxes related to a school project, perhaps the teachers and students involved should foot the bill for state and municipal services assigned to the investigation. I'll vote for that: Don't do the crime if you can't do the time.

And, given the current national love affair with "terror" and the misdirection fear it has engendered in the nation, I would love to hear two or three reasons why this experiment should not be characterized as stupid.

PS. In Saturday's follow-up story, it seems the whole thing was part of a (possibly) Smith College photography project.
Posted by genkaku at 7:57 AM