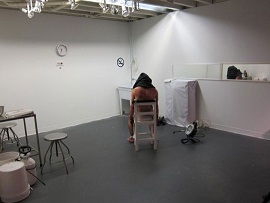 If there were ever two peas that deserved to nestle in the same pod, the Central Intelligence Agency's extraordinary rendition program and the world of women's shoes must come close to heading the list: Both inflict an unimaginable pain that is generously praised by people who have college educations and should know better.

The black-site prisons maintained 'secretly' under U.S. auspices in foreign countries resound, when the client is not gagged, with screams worthy of the beleaguered female foot whose shape bears little or no resemblance to the haute couture manhandling it receives at an upscale soiree. To use the word "torture" is in itself barbaric to the peddlers: This is the exquisite apogee of agony, an art form, a tiara, a chalice of ... well, let's just say that crucifixion is small potatoes by comparison.

After the attacks of Sept. 11, 2001, there was a chorus of agreement that "we gotta get those bastards." The planes crashing into the World Trade Towers et al. was horrific. If torture is what it took to winkle out the perpetrators, then so be it. Psychologists, lawyers and a host of others weighed in on the legality and appropriateness of torture. Some 54 countries availed themselves of the waterboarding and tying men's testicles to car batteries. There was agreement. There was truth. There was a righteous vengeance. The word "terror" filled the air and multiplied by implication as time passed. We agree, more or less. It must be true.

Only later, when the equally widely-held view that torture did not necessarily produce useful intelligence were the mangled and tortured bodies tallied. Oh well....

Imelda Marcos, widow of Philippines dictator Fernando Marcos and sometimes called the Jacqueline Kennedy of the Philippines, was once said to have owned over 1,000 pairs of shoes. Whether this vast collection ever led her to reconsider the distorted and torture-prone match between foot its adornments is unknown. As an odds on bet, I imagine that Imelda just recognized the pain as part of the price for being social, for gaining attention from the chic and powerful. And nor was she alone -- women's shoe stores are far from out of common-sense business. There will always be some campy shoe designer to point out the 'beauty' and, more important, the kinship among women who seek out that beauty... or at any rate the agreement as to what that beauty might be.

Everything so pretty, but at what price?

Yesterday, on an Internet Buddhist bulletin board I wrote:

I wonder how many of the frictions and kerfuffles of this life would fall flat on their face if there weren't an on-going, seldom-spoken premise that agreement assures truth. How often do I feel relieved and vindicated that a lot of people agree with me? "Compassion," "clarity," "enlightenment," "love" "God" and on and on.... Pretty often is the unfortunate answer. It is unfortunate because that agreement allows me to skip over the highly-annoying necessity of finding out for myself if something is true,
There is a difference between the applause-o-meter (or catcall-o-meter) and whatever it is that has some true meat on the bone.
An ex-Jesuit shrink friend of mine once observed mildly, "Life is a smorgasbord." And that strikes me as about right: Make your choice, shoulder the responsibility, be thankful for what proves nourishing ... and puke out the rest.

What a confounding balancing act -- to sacrifice truth, which is a lonely business, for the kinship of great agreements and applause. This is not to say that far-reaching social agreements are, of necessity, somehow false. Perhaps they are true. But so long as the comfort such agreement provides is the main reason for asserting the truth, to that extent there will always be doubt. Human beings are social critters, so, which would you rather have, a great circle of friends or a nailed-down, hard-won sense of the truth ... the kind that involves reflection and effort?

While waiting for my sandwich in a D'Angelo fast-food shop the other day, an elderly guy ahead of me was doing the same. "And how are you today, young fellow?" he asked me idly to pass the time away. "I'm fine, young fellow, " I replied playfully ... the two of us were clearly over 70. "You're right," he continued. "I am a young fellow...." and there were some more playful words to fill the space. "Yup," I agreed. "you lie to me and I'll lie to you...." and in between we can assert a warming kinship and encouragement.

Nothing wrong with all this, I suppose, but it did strike me as a small example of some tomfoolery that fooled no one and set itself up for a defeat in later times. When you're young, you're young; when you're old, you're old: What precisely is wrong about acknowledging the bareass evidence seen in whitening hair, too-straight-and-probably-false teeth, and the advance of wrinkles and Jell-O jowls?

I guess that after a certain age, the question might be asked, "Who cares if it's fact or fiction?" Maybe kinship is worth the sacrifice of truth; maybe truth is worth the sacrifice of kindhip. I do know it becomes harder and harder to walk into a personal outback that holds the keys to the truth ... it really is lonely and, when you get down to it, what the hell would anyone do with the truth if they had it?
Posted by genkaku at 9:40 AM