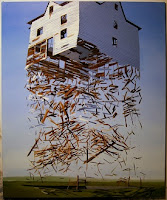 Yesterday, a friend called to say his son was being transported to a Boston hospital from Maine. The son had apparently overdosed on Tylenol and needed a liver transplant or he would die. My friend is old and tired, so the news was redoubled in its intensity: He could not go with the son he was trained to love and protect.

How things stand this morning, I have not yet found out and, from afar, I too feel the sympathetic winds: How would I feel if one of my children were threatened with death? There is no answer but that doesn't mean the question can likewise go unasked.

It's a gob-stopper and yet this gob does not stop. Your kids aren't 'supposed' to die first. In fact, your kids aren't supposed to die. They're supposed to stay around and wave goodbye when you die, right? There are a million assumptions like this, climbing out of hidden lairs where they were assured and went unchallenged except in an occasional intellectually-distant fashion. How can the protector no longer protect? Could he, in fact, ever have truly protected? Well, he tried and perhaps convinced himself that he had somehow, in whatever small way, acted as a firewall for what is loved.

But now it's all shot to shit -- shot to shit and the bald fact is that it was ever thus ... uncertain, approximate, and sometimes flat-out wrong. So then there is the situation itself underpinned by a long-standing inaccuracy that passed as accuracy.

Everything seems to be blown up... and I am just imagining where my friend is living the explosion.