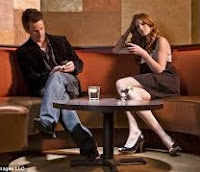 The land-line phone book was tossed up on the porch this morning -- a waxing anachronism in a day and age of more-cell-phones-than-people-and-each-'smarter'-than-the-last. The book is thin, given that it covers two counties in my neck of the woods. In New York City, the phone book used to be so thick that strong men would show off by ripping it in half and police officers would sometimes whack reluctant suspects as an encouragement.

Fifty-five pages devoted to throwbacks like me who have an address and a phone. Thirty pages devoted purely to businesses. I used to like having a cell phone for in-the-car emergencies and quick connections with family members, but otherwise, the fidelity was poor and the price not worth the possession. Most of the devices devoted to "connection" these days strike me as ways of driving people further apart and I don't like it. ... Facebook, Twitter, an "app" for this and an "app" for that ... horseshit.

But I can recognize my own anachronistic being in all of this. If everyone is doing it, I must be wrong, though I decline to agree with the assessment. I'll just keep on waiting for all those lonely-and-getting-lonelier people to tune in to something serious.

I will do what I can not to converse with anyone holding a cell phone as we speak, wearing expensive sun glasses s/he neglects to take off or hidden behind a barbed-wire beard.

Talk about lonely, right?
Posted by genkaku at 12:00 PM