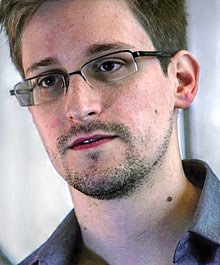 Edward Snowden has set out the case for Barack Obama granting him a pardon before the US president leaves office in January, arguing that the disclosure of the scale of surveillance by US and British intelligence agencies was not only morally right but had left citizens better off.
The US whistleblower’s comments, made in an interview with the Guardian, came as supporters, including his US lawyer, stepped up a campaign for a presidential pardon. Snowden is wanted in the US, where he is accused of violating the Espionage Act and faces at least 30 years in jail.... The [US] Congress, the courts and the president all changed their policies as a result of these disclosures. At the same time there has never been any public evidence that any individual came to harm as a result.” [emphasis added]

[Part of the whole kerfuffle Snowden stirred up includes the calling out of views that assert damage was done but -- trust me -- to divulge it would compound the damage. We can't tell you and we are patriots ... etc.]

My guess is that there is not a snowball's chance in hell that any public figure will summon the backbone it would take to pardon Snowden.

That just leaves the rest of us to thank him.
Posted by genkaku at 6:17 PM