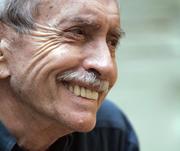 NEW YORK (AP) -- Three-time Pulitzer Prize-winning playwright Edward Albee, who challenged theatrical convention in masterworks such as "Who's Afraid of Virginia Woolf?" and "A Delicate Balance," died Friday, his personal assistant said. He was 88.

He died at his home in Montauk, east of New York, assistant Jackob Holder said. No cause of death was immediately given, although he had suffered from diabetes. With the deaths of Arthur Miller and August Wilson in 2005, he was arguably America's greatest living playwright.
Several years ago, before undergoing extensive surgery, Albee penned a note to be issued at the time of his death: "To all of you who have made my being alive so wonderful, so exciting and so full, my thanks and all my love."

Talk about a guy who could shake your salt cellar!
Posted by genkaku at 9:24 AM