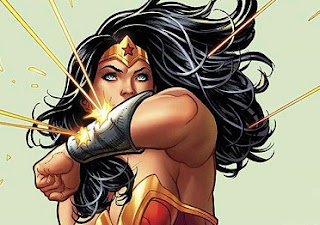 One day, when my daughter was still in high school, she came home crabby as a wet cat. It was "gay pride week" at her school and while she had nothing against homosexuality, still she didn't like it shoved down her throat. "Do we have a heterosexual-pride week?" she asked with an edge. We talked about the issue a bit and I encouraged her to ask her question in a letter to the editor of the local paper, which she did. My feelings, usually put more politely, were that "I don't care if someone screws doorknobs. What I care about is whether they are jerks or not."

And now comes the author of a comic heroine, Wonder Woman:


Rucka was critical of writers that shoehorned their characters’ sexualities into their narratives for the sake of doing so.
“The character has to stand up and say, “I’M GAY!” in all bold caps for it to be evident,” he said. “For my purposes, that’s bad writing. That’s a character stating something that’s not impacting the story.”
But in the case of Wonder Woman, he said, her queer identity was important to the narrative because Themyscira was represented as paradise, and with that came diversity.
“It has to be an inclusive and accepting society, for a number of reasons — paradise being one of them.”

It's the story, stupid!

But what a shift in my lifetime.

Today -- right now -- a woman is on the cusp of becoming the next president of the United States -- the first of her kind -- and all the wrangling and tangling that went into that eventuality is ho-hum to the young people who may or may not vote: Of course a woman will be president; what's the big deal? Of course Wonder Woman is gay; what's the big deal? Of course discussing a comic book character is relevant to my current culture ... the tattered national infrastructure, $1.3 trillion in student debt arranged by the donations to politicians, the wars that go on and on ... never mind ... here comes Wonder Woman. Relevant, relevant-er, relevant-est.

In my memory's eye, I can still see the wracked face of an army buddy who, as the two of us got a little drunk together, confessed he was gay in a unit which was four-square against the homosexuals who might be kidnapped and blackmailed into revealing all the secrets of our ever-so-secret organization... which, most emphatically, did not accept homosexuals. There was an awful-ness to the look on his face: He could not be who he wanted to be and it was painful. He was not a jerk ... he was just another pilgrim looking for paradise, I imagine.
Posted by genkaku at 8:12 AM