sexy without the sex 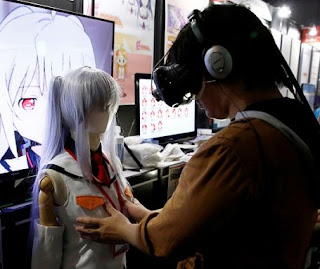 The sexier the world is, the less sexy it becomes.

Virtual reality got a little too real at the Tokyo Game Show on Friday when gamers lined up at one exhibition and got touchy-feely with a mannequin that with VR goggles transformed into a female anime character.
The show's organizer told software developer M2 Co. to stop visitors fondling the dummy's breasts, which with built-in sensors prompted the anime image in the goggles to move.
The hands-on display was meant to demonstrate technology to turn flat pictures into 3D images.


What I want to know is, where are the male dummies in all of this? Or was showing a robotic penis a step too far? Do women feel unduly excluded from libidinous romping in goggles? Where's the dong app?
Posted by genkaku at 9:19 AM