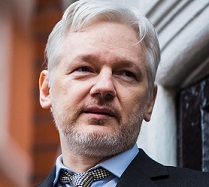 STOCKHOLM (AP) -- Sweden's top prosecutor said Friday she's dropping an investigation into a rape claim against WikiLeaks founder Julian Assange after almost seven years because there's no possibility of arresting him "in the foreseeable future."

The announcement means the outspoken WikiLeaks leader no longer faces sex crime allegations in Sweden, although British police say he is still wanted for jumping bail in Britain in 2012.

Perhaps Donald Trump might take a detour on his current trip abroad and consult with a man who had similar problems.
Posted by genkaku at 8:42 AM