I had wanted to make some mention of Memorial Day, which is today in the United States. All sorts of things, many of them imaginatively, ragingly sad, whizzed around in my mind. And then a friend passed along the perfect apostasy for an apostasy-strewn day and year....

THE RIVER OF BLOOD MEMORIAL ERECTED BY DONALD TRUMP 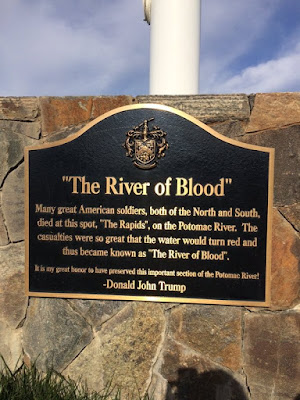 [From Wikipedia] The River of Blood monument is a monument located on a golf course on Lowes Island, Virginia owned by US President Donald Trump. A plaque signed with Trump's name states that the monument marks the site of numerous deaths in the American Civil War, but no battle or other event with mass casualties took place there.

Maybe, as the 'president' might say, it's nothing but fake news ... another disinformation campaign (the last Wikipedia update is dated today), but, well some disinformation rings.... and there are plenty of articles calling out the allegations before Trump became 'president.'
Posted by genkaku at 10:43 AM