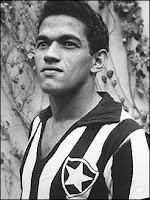 The corpse/skeleton of the Brazilian soccer legend Garrincha (Little Wren) appears to be missing. Considered by some the greatest winger of all time, Garrincha "played 50 times for Brazil between 1955 and 1966, helping his nation to World Cup victory in 1958 and 1962, when he shared the golden boot."


His daughter Rosangela Santos said: "My father did not deserve this. It's very upsetting not knowing where he is."
She added: "The mayor has promised him a mausoleum but they need to find him first."