It is hard to imagine that twenty years from now, Americans may look back on the presidency of Donald Trump and positively pine for the good old days. A man who doesn't know much about the presidency and knows little about U.S. history and imagines everything is the kind of deal he, as a slippery businessman, can make. The most daunting aspect is not so much that he gets things wrong as that he doesn't seem to care much that he does get it wrong. What the fuck -- it's only the United States; it's only facts. 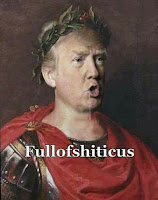 The picture/caption passed along in email suggests Trump knows what he's talking about and chooses to bend the facts... typical political spin. But the more pungent fact seems to be that he doesn't know anything about the facts he blithely bends.

I keep thinking that a GoFundMe campaign might solicit a penny apiece from Americans who would use the money to send Trump to classes in American history....

And Trump is winning over the news media which seem now content to go beyond what Trump actually says to speculate on what he might mean.