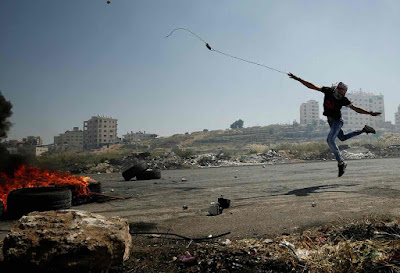 
A Palestinian protester uses a sling to hurl stones towards Israeli troops during clashes at a protest in support of Palestinian prisoners on hunger strike in Israeli jails.
Photograph: Mohamad Torokman/Reuters


Another example, I suppose, of a guy with a rock taking on guys with loaded weapons.


A Jordanian citizen stabbed and wounded an Israeli police officer who then shot him dead in Jerusalem's Old City on Saturday, Israeli police said, the latest in a string of street attacks....

Police spokeswoman Luba Simri said the officer was walking down a street when he was attacked by a 57-year-old Jordanian who had arrived in Israel for a visit a few days earlier.

"The terrorist rushed toward him, whipped out a knife that he had in his possession, stormed him and began stabbing him. The police officer responded with determination and in a professional manner, managed to activate his weapon and neutralized him," Simri said.

Let that line sink in: "The police officer responded with determination and in a professional manner, managed to activate his weapon and neutralized him," I thought only George Orwell talked like that ... or maybe Joseph Goebbels.

Beleaguered and pummeled little Israel ... oh, and did anyone say "nuclear armed?" Am I wrong or is the weekend the preferred time for Israel to kill off yet another knife-wielding ... ummm.... "terrrorist" who is waving a knife in the face of loaded weapons? I honestly don't think anyone's blameless in this Israeli  apartheid campaign, but the arrogance  and the willingness of allies to lie down and spread their legs so that the stronger adversary can wreak his or her righteous havoc.....
The batting average of late:


Thirty-seven Israelis, two American tourists and a British student have been killed in the street attacks which have slowed in recent months, though not stopped.
At least 244 Palestinians have been killed since the violence began. Israel says at least 164 of them were carrying out stabbings, shootings or car ramming attacks. Others died during clashes and protests.

Whenever I read about another of Israel's venomous (but badly armed) foes dealt with in mortal fashion, and then read the batting average, I tend to think that for every one of Israel's soldiers or civilians under attack (sometimes, but rarely fatally) I automatically figure that for every Israeli or Israeli ally, three of Israel's under-armed opponents are likely to be dead.
Posted by genkaku at 7:42 PM