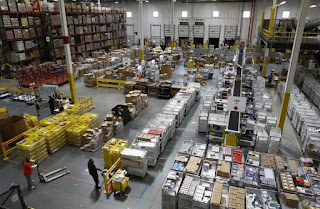 WASHINGTON (AP) — After years of sluggish pay gains, the economy may be starting to work for America’s low-wage workers.
Amazon’s announcement Tuesday that it will raise its minimum wage to $15 an hour will intensify pressure on other companies to lift their pay levels as well. Among the most likely to do so: Amazon’s rival retailers and warehouse operators, many of which are facing the prospect of staff shortages as they ramp up for the holiday shopping season.
“This is going to be a big deal for very low-wage workers,” said Ben Zipperer, an economist at the liberal Economic Policy Institute. “It’s going to compel other businesses to raise wages as well.”

"Don't hold your breath" is my reaction.