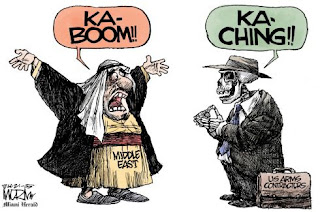 Joe, my good-natured and decent-hearted-Christian neighbor from across the street, recently returned from a trip to Europe, largely in Italy. He came back with a bit of a tan that contrasts nicely with his full head of white hair and white beard that flows downward over part of his throat. Joe is 5'6" to 5'8" at a guess and has a pot belly that allows kids to imagine he is Santa Claus. He loves that. He's in his early 70's, and shuffles a bit from the elements of aging that the two of us occasionally bemoan together.

"Did I tell you what they did to me in London?" he asked this morning. Not that I recall, I replied. Well, what happened was that he was taken out of the airport line, asked to strip to his skivvies and then asked to remove his "trainers," which, as it turned out, referred to his sneakers or running shoes. The difficulty lay, as it seemed, in the fact that his passport showed him without a beard and the beard now clearly on his face was ... well ... apparently suspect. And he was sort of tan.

Joe the bomber ... my neighbor.

Joe told his tale while laughing. A more unlikely 'terrorist' you couldn't pick ... which was why, of course, he was picked. You just can't tell, can you? Kindly old men are the perfect cover for dread 'terrorists' who provide fodder for a lot of police state jobs.

Needless to say, the authorities looked him up one side and down the other and he did, eventually, make it home. He and I had grown up in another era. But that era is not this one. We agreed that our scare-'em-silly president will deploy troops to the Mexican border to ward off the mass migration from central-American countries the U.S. helped destabilize ... make more dangerous ... and prompt a flight away from the violence.

Last night, on public television news, a commentator noted that after two years in office, Donald Trump's approval ratings are almost exactly as the same as they were when he won the presidential election in 2016. Men, women and whoever else feels left out of the gravy train still lean towards his brash, racist agenda. And Trump is doubling down on that plurality as the mid-term elections near -- traveling to parts of the country to stump for those who voted for him in the past... betting that the magic is still there.

I am afraid he is right.

In the then-Communist U.S.S.R., a young fellow once told me in 1968 that a lot of Russians favored a strong (dictator strong) leader. Look at Stalin, he said. Even an insane daddy is still a daddy.


A white woman accosted a family speaking Spanish at a Virginia restaurant, demanding they show their passports and shouting vulgarities in the latest incident of anti-immigrant sentiment to go viral on video.
The incident, which comes as Donald Trump has injected a stream of invective against immigrants into the midterm election campaign, happened at Andy’s restaurant in Lovettsville, Virginia, on Friday.
The video, obtained by Telemundo 44, shows a sunglasses-wearing white woman wagging her finger and shouting at the family to “show your passport” and “go back to your fucking country.”

When it comes to beards, I've got to say I feel uncomfortable. But I don't mean it by race. If I cannot see a person's -- any person's -- face, I feel short-changed. It feels like brinksmanship and I really don't want to play. It's like people with aviator sun glasses -- kool cops, that kind of thing -- who fail to take them off when addressing me. How do I go about trusting anyone whose first implicit presentation is one of hiding and one-upsman-ship?

The simplest explanations are not always the best, but oftentimes they'll do. And in that regard, I will stick with the Somali security officer who observed when addressing the pirates who targeted oil tankers off his shores, "If you do not share your wealth we us, we will share our poverty with you."