who's your daddy, Donald 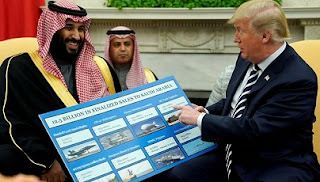 By BERNARD CONDON, STEPHEN BRAUN and TAMI ABDOLLAH Associated Press
Oct 13, 2018
NEW YORK (AP) — He's booked hotel rooms and meeting spaces to them, sold an entire floor in one of his buildings to them and, in desperate moments in his career, gotten a billionaire from the country to buy his yacht and New York's Plaza Hotel overlooking Central Park.

President Donald Trump's ties to Saudi Arabia run long and deep, and he's often boasted about his business ties with the kingdom.

Now those ties are under scrutiny as the president faces calls for a tougher response to the kingdom's government following the disappearance, and possible killing, of one of its biggest critics, journalist and activist Jamal Khashoggi.

"The Saudis are funneling money to him," said former federal ethics chief Walter Shaub, who is advising a watchdog group suing Trump for foreign government ties to his business. That undermines "confidence that he's going to do the right thing when it comes to Khashoggi."

In the Constitution, the word "emolument" is a fifty-cent word for what dime-based guttersnipes like me call a "bribe."


Unless you were paying very close attention, you may not have seen that Trump’s legal difficulties worsened considerably while the eyes of the nation were on his embattled Supreme Court nominee.
For the longest time Donald Trump has been flagrantly flouting the Constitutional proscription on taking gifts from foreign governments in exchange for services rendered.  He knew that maintaining direct control of his business empire while serving as President would subject him to potential impeachment proceedings, which is why he promised to put all of his holdings into a blind trust managed by his family.  He, of course, did not do that and instead brought his daughter and son-in-law into the highest levels of the government. He simply made the bet that Democrats and the law itself would never be able to hold him accountable for it.
The biggest challenge in bringing a suit over emoluments (outside of impeachment which is a political function) is that of “standing.”  Is there any entity that can prove it is sufficiently directly harmed by Trump’s behavior to bring a civil suit?  That question has been open for the better part of two years now.
Yesterday [Sept. 28, 2018], that obstacle was blown to bits:

A federal judge has ruled that 200 Democratic members of Congress have legal standing to sue President Donald Trump for allegedly violating the emoluments clause of the Constitution by doing business with foreign governments while in office.
The emoluments clause bars presidents from accepting gifts from foreign and domestic interests without consent from Congress.

A president of the United States points out in the presence of a benefactor some of the 'benefactions' (above photo)... and he even does it in front of the camera .... with pictures ... and the benefactor feels himself secure enough to let this guy with a wig talk up a storm. Who's your daddy, Donald?

Don't get me wrong -- I appreciate the $40 annual pay rise for those of us receiving Social Security. It ain't exactly the tax cuts for the wealthy that it might yet be walked back to fund, but it's a whiff of the green ... not a taste, but a whiff. And I surely am grateful to all the upstanding virtue mongers who were so notably slow to call out the emoluments they themselves might yet get. Don't worry, guys and gals, the Saudis have something like $1.4 trillion in to buy out those who feel they have been overlooked.