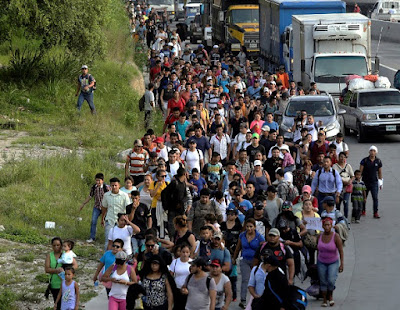 What a boon for the forgiving and frantic Trump supporters -- as a thousands-strong caravan of Central American migrants make their way to the U.S. border even as the mid-term elections near and Trump's promise of a wall along the border remains in limbo. The migrants are largely brown people, poor people, and they're out to suck America's wealth dry ... dontcha know. We don't do poverty (except we do) and we don't do brown, right guys? Forget about the Irish. Forget about the Italians. The Swedes, Norwegians, Danes, Russians, Poles ....


WASHINGTON (Reuters) - President Donald Trump said on Monday he has told the U.S. military and border authorities that a migrant caravan heading toward the United States from Central America represented a national emergency, as he vowed to cut aid to the region.
“Guatemala, Honduras and El Salvador were not able to do the job of stopping people from leaving their country and coming illegally to the U.S. We will now begin cutting off, or substantially reducing, the massive foreign aid routinely given to them,” Trump wrote in a series of posts on Twitter.
Since Trump became president last year, the United States has already moved to sharply decrease aid to Central America....
“Sadly, it looks like Mexico’s Police and Military are unable to stop the Caravan heading to the Southern Border of the United States,” Trump wrote in a tweet, adding: “I have alerted Border Patrol and Military that this is a National Emergy [sic].”
A 19th-century federal law restricts using the Army and other main branches of the military for civilian law enforcement on American soil, unless specifically authorized by Congress. But the military can provide support services to law enforcement and has done so on occasion since the 1980s....
Later in April, Trump and Defense Secretary James Mattis authorized up to 4,000 National Guard personnel to help the Department of Homeland Security secure the border if four Southwestern U.S. states.
Some specific statutes authorize the president to deploy troops within the United States for riot control or relief efforts after natural disasters.

The mass migration appears to have been fomented by U.S. actions in Central America, but who among Trump supporters will scratch that surface? You can almost hear the support rising: "You see? If we had built the wall, none of this would have happened."

It's another wonderful case of misdirection -- don't worry that the jobs, to the extent there are any, being created, are low-wage jobs; don't worry that the president of the United States brags that the Saudis who probably murdered a columnist in Istanbul have personally propped up his fiefdom; don't worry ... look over here ... I told you we should build a wall against this impending flood... which we, it seems, enabled.

And call out the army.

While Congress sits on its hands.

Trump fires up his base with the help of people fleeing the insecurity and violence fired up by the country he is more than willing to sell out. 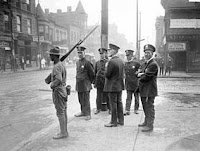 Drain and re-people the swamp seems a likely avenue of attack ... sort of like the repeal-and-replace health agenda Republicans once promised during the 2016 presidential race.

Call out the military to avert an emergency ... sort of like the early 1900's and 1930's when cops and soldiers were called out to quell the coalescing workers outside the socio/industrial gates... precursors to the "too-big-to-fail" agenda.


SYDNEY (AP) — Prime Minister Scott Morrison delivered a formal apology Monday to Australia’s victims of child sex abuse, saying the nation must acknowledge their long, painful journey and its failure to protect them.
Morrison’s emotional speech given in Parliament before hundreds of survivors followed the conclusion of a Royal Commission into Institutional Responses to Child Sexual Abuse, the nations’ highest level of inquiry.

Owning up to errors may not lessen the vileness of the past, but at least there is some decency in it. I suppose I can wish till I'm blue in the face before I see a similar decency and ownership in my own country ... whether it be church-oriented or migration plea.
Posted by genkaku at 12:39 PM