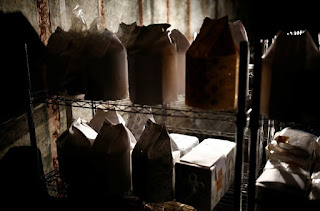 A fragmenting Japan ... or so it seems. If fewer people buy into an obligatory veneration of the dead, spiritual institutions which help inter the remains will see a dip in income ... and so the dominoes tumble?


YOKOSUKA, Japan (Reuters) - Unclaimed urns containing ashes of the dead are piling up by the thousands across Japan, creating storage headaches and reflecting fraying family ties and economic pressures in a rapidly aging nation.

Isn't Japan one of those places that venerates its "ancestors?" What came before is precursor to what will come later? The "then" of the past ... the "then" of the future? And there is money to be spent in between.

Tradition carries the load, but when the energy to shoulder the load dwindles, then what? The waves of tradition rise up and the waves of tradition fall away. I suppose everyone would like to think there is meaning in a life thus-spent, but can anyone really know that meaning and thereby honor it?

Flowers in the spring, stubble by the fall.

Who will capture that beauty?
Posted by genkaku at 11:22 AM