There's art and then there's art: Passed along in email today was this -- "The Republican Club:" 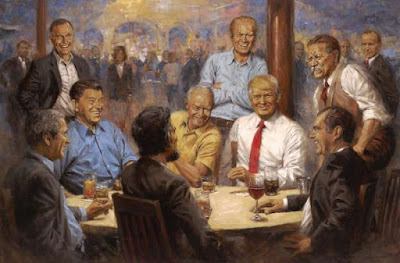 President Donald Trump liked a painting of him having drinks with Abraham Lincoln, Richard Nixon and Teddy Roosevelt so much that he called the artist on the phone and then put a print of it in the White House.

It seems to me that the gathering deserves some sort of cut line. Make up your own. Mine is along the lines of, "Why are these men smiling? Someone just mentioned tax breaks and trickle-down economics in the same sentence with "democracy.""

It's not quite fair, obviously, but this is not an era of fairness.
Posted by genkaku at 11:26 AM