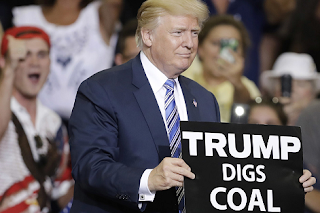 Is it possible that Trump supporters are getting it and that talk is cheap?


WASHINGTON (Reuters) - The top U.S. coal miners union has put a larger share of its campaign donations behind Democrats ahead of the Nov. 6 elections than in 2016, as dimming hopes for a coal industry revival led by President Donald Trump reinforce fears about the safety of worker pensions.
The United Mine Workers of America has donated nearly 84 percent of its money to Democratic candidates and committees in national races, according to a Reuters analysis of campaign finance data. That is a roughly 20-point jump from 2016, when Trump courted coal miners with promises of an industry comeback....
While the Trump administration has rolled back some environmental protections in its first two years, the promise of a coal comeback has yet to be fulfilled.

Instead of the war chant directed at Hillary Clinton -- "Lock her up!" -- perhaps a new chorus and signage will read on behalf of the Liar in Chief: "Full of shit!" Just because someone is stupid doesn't mean they have to be stupid.
Posted by genkaku at 10:07 AM