the right to be an idiot 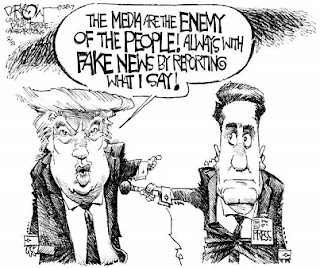 As a powerful hurricane dubbed "Michael" attacked the panhandle of Florida today, rescue workers could only watch and pray with the rest of the population. Residents had been warned. Some heeded the warning. Others did not, prompting Walton County Sheriff Michael Adkinson to observe via his Twitter account on the internet:


While it might be their constitutional right to be an idiot, it’s not their right to endanger everyone else! (boldface added).

Two days ago, the newspaper USA Today ran what is being described as an oped piece by President Donald Trump. A Washington Post fact checker observed that almost every sentence in the piece was guilty of either misrepresentation of facts or bald-faced lies.

Perhaps it is time to add the sheriff's observation to the U.S. Constitution.
Posted by genkaku at 6:37 PM