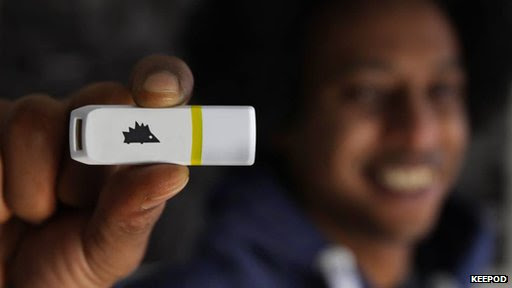 If others are anything like me, there is a certain built-in, blase assumption that comes with the computer I work on. It's here, it works, its educating or entertaining functions are at my fingertips ... basically it's like soap in a soap dish or toothpaste in a toothpaste tube.

A "likelihood" is not a promise, but still I think there are better odds and what's good for you has the potential to be good for me.

And it is in this regard that I liked seeing that a small idea holds out some promise of spreading the Internet wealth. To read and write; to see pictures of a beast or activity never seen before; to hear words in a different tongue; to witness a wedding ceremony awash in rituals never witnessed; to find delight or distress in some new music....

The USB flash drive is one of the most simple, everyday pieces of technology that many people take for granted.
Now it's being eyed as a possible solution to bridging the digital divide, by two colourful entrepreneurs behind the start-up Keepod.
Nissan Bahar and Franky Imbesi aim to combat the lack of access to computers by providing what amounts to an operating-system-on-a-stick.
In six weeks, their idea managed to raise more than $40,000 (£23,750) on fundraising site Indiegogo, providing the cash to begin a campaign to offer low-cost computing to the two-thirds of the globe's population that currently has little or no access.