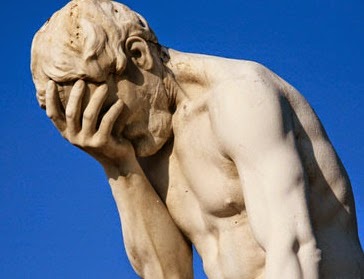 Last night, at the suggestion of a friend, I tried watching the 2012 movie, "The Railway Man." I watched perhaps the first third, then skipped to the end ... and was ashamed of myself.

The movie is about a man who suffers from post-traumatic stress disorder in the wake of his capture and internment by the Japanese during World War II. Like anyone suffering from PTSD, this was a story of an outwardly ordinary fellow who cannot escape the horrors of an earlier time: They rise up unbidden and will not be denied ... in the middle of the most mundane of circumstances.

The movie was quiet and understated and perhaps, in my eyes, the more horrific for that. No doubt the movie had flaws -- it was based on a true story and was not always true to that story.

But none of that mattered. The story was good. The problem was that I knew what was coming and I simply did not have the courage for it. Fiction or non-fiction, the credible horrors one group can visit on another -- so often under a legitimizing bureaucratic banner that is political or religious or otherwise agreed-upon -- stir up a massive sorrow I am unwilling to shoulder.

But I am ashamed.

I am ashamed because as much as I might like to forgive myself for shying from what is repugnant and grinding and heinous, still I dislike the habit of slithering forgiveness it can engender: By not looking facts in the eye, there can be a slow slide to the feeling that if I turn my head, or if I get used to the serene and distant dissections that can occur ... well, if I avert my eyes, it doesn't exist, or at any rate I can rest easy. Look at the sex abuse engendered by the Vatican, the Buddhist sex scandals, the black-op rendition sites, the Nazi concentration camps where those living just down the road knew nothing ... etc. etc. etc.

I hate that shit ... and yet I couldn't watch the movie in all its gritty and fabulously-mundane horror. The sadness was too much for me. How I wish I could be content to say things like, "it's past" or "you weren't there" or "what about all the good stuff that evolved?" How I wish I could be content with "compassion" or "serenity" ... which seems so often to be cowardice dressed in self-referentially consoling robes .... cowardice like my own.

How can anyone truly appreciate the light when they turn away from the darkness? It's not possible, no matter how many hymns are sung.

So the best I can do is to pray that others with greater courage than my own will not turn a blind eye and blind heart to the vast sorrows so often occasioned by what is wildly-applauded as virtuous or patriotic or kind.

I wish I had that kind of courage, but the fact is, I do not have it. The best I can do, perhaps, is kneel down by some itinerant Christian and pray, "God forgive me!"
Posted by genkaku at 6:45 AM