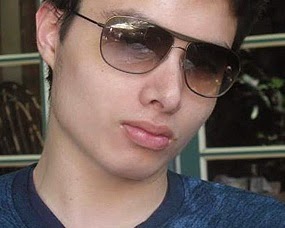 Imagine being stuck in a universe where you took for literal truth the truth that others so patently believed in. No checks or balances -- just flat-out believed and acted upon.

Some of that horror comes true for me in the case of Elliot Rodger, the 22-year-old who almost certainly killed six people in Santa Barbara Friday and then, it seems, killed himself after wounding another seven.

A couple of the videos (here and here) show a neatly dressed young man in the throes of a belief that he had played by the rules -- accumulated the right stuff and the right manners and the right deportment -- and the world -- especially the young women who rejected him sexually -- had not provided the brass ring it had promised. From his point of view, was it any wonder he was angry?

Based on subsequent actions, it is no wonder anyone writes Elliot Rodger off as a crazy person, clinically unbalanced, a wack-job ... and oh-so-very-different from me and thee. And Elliot Rodger is different in the sense that 'me and thee' didn't go on a bloody rampage.

But what gets to me is the matrix from which he arose -- a world in which stuff and spin is constantly put forward as a (wo)man-measuring devices. Is there a moment on television or the Internet that doesn't send a message of this sort? And no one ever accused Facebook of level-headed humility ... size and Facebook do matter!

I am not interested here in some white-whine mewling about "materialism" or "acquisitiveness" or whether "Buddhism has the answer." I am interested in the world as it portrays itself and is bound to enfold anyone.

Taken literally, who wouldn't be really, really pissed to find out that the promises of $300 sunglasses or a $35-40,000 BMW had not been kept? The more literally the promise was taken, the greater the anger.

I guess a part of me views Elliot Rodger as I view spiritual cults -- a very negative result that grew directly out of what a well-coiffed majority might portray as acceptable and sane and somehow good. What is spooky about Elliot Rodger is not how different he is from the society of which I am a part, but rather how joined-at-the-hip similar he is. (Quick -- check the underwear drawer, the designer-label toilet brush, the polo shirts, the slacks, the golf clubs, the perfume and aftershave, the weapons .....)