"a kiss that lasts forever..." 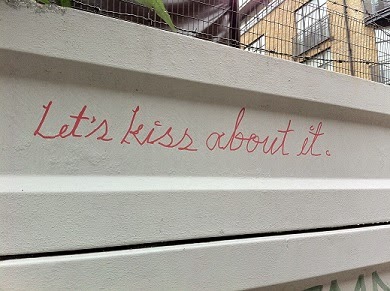 Back before blogs and Fox news, people found other ways to express the wit and bias and raw reaction that they tended to keep under wraps in public. Among other venues for graffiti, public rest rooms (at least the men's version ... I don't know if women were as prone) were popular.

Am I wrong or simply doddering again when I recall that personal post-it's seemed to contain more wit or imagination in earlier times? Yes, there were the obvious, drunken, sexual notes -- "For a good time, call Brenda" -- but there was also an intelligent quirkiness apparent: "Call Brenda -- she'll blow your mind as well."

There was racism as ever, but there was also a counter-point to some of the whiplash assertions:

In one handwriting, for example, there was: "Niger, (sic), go back to Africai (sic)!" Below this, in a much neater hand was the retort, "I'm taking your mother and sister with me."

Racism, sexism, drunkenness ... none of it was much different, I imagine. It was as stupid and mean-hearted as people have the capacity to be, then or now.  But also, there was an infusion of the kind of imaginative quality that The Beatles and LSD injected into public life ... statements that invited readers to be confused or delighted or disdain or simply smile ... as for example, "A kiss that lasts forever is a strange gift."

There was enough general intelligence to enjoy the ridiculous.

Nowadays, I sometimes think, things are so ridiculous that the enjoyment goes begging.

But that may just be my bathroom mirror talking.
Posted by genkaku at 8:58 AM