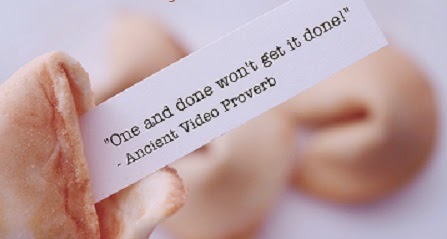 I can actually remember a time when I talked the city editor into letting me do two stories -- of equal length and standing side by side -- that offered the 'for' and 'against' facts of a particular school issue that seemed to go on and on: I was convinced that if the facts were presented, the the reader could make up his/her mind and I could stop writing stories that never seemed to end.

It was the beginning of my journalistic education: In general, facts don't convince people ... their beliefs do. The idealist within me could writhe as much as it liked. My two stories elicited a nice note from the superintendent of schools and ... the stories kept needing to be done ... twice-chewed gum chewed yet again.

Obituaries, sports, comics and horoscopes are about as close as anyone can come to fulfilling a desire for a 'conclusion' ... a sense of one-and-done ... a the-end on a particular topic. The fulfillment is not perfect, of course, but it's a lot closer than news stories will ever get: Here is something that I no longer have to think about; like a mystery novel, the case is wrapped up; and there is something comforting about NOT having to rechew today's journalistic gum tomorrow.

One-and-done: There is only so much information that anyone is willing to ingest before exhaustion kicks in. "Enough!" the mind insists. Instead of going on and on and on and on, I will make my choice and believe whatever it is I believe about the treatment of Palestinians; the corruption or high points of religion; the education of children like my own; the latest war my government has decided to begin or continue; or the marvels of a sunset. One and done: I have enough stuff cluttering my life and, right, wrong or indifferent, I will believe ... whatever it is I choose to believe.

And it is here that there is something soothing about obituaries, sports, comics and horoscopes. In large measure, each is more clearly complete than other stories: Dead is dead; the game is over; the panels make their amusing point; and the prognostication may be true or false but in any case has no real impact outside fortifying the beliefs I already hold.

One-and-done: How nice to place some task or thought process in the rearview mirror. It's not a perfect solution, but it's easier. Easier, and seems to accord with the fact that what I do is done ... for the moment. Belief may have palpable and sometimes painful flaws, but ... well, I'd rather watch TV for a while and adding more information seems incapable of solving much ... just as failing to add information also seems incapable of solving much.

One-and-done is the way of the world and simultaneously is utterly impossible.

Or anyway, that's that I believe.
Posted by genkaku at 9:10 AM