An Israeli, the Bedouin whiz-kid intern Othman Abu al-Qiyan, appears to be dead and a lot of people (according 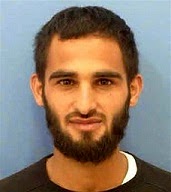 to the Associated Press) are wondering whether he died as a Muslim radical. How could it be that he would be radicalized and throw in his lot with the 'wrong' people?

Othman Abu al-Qiyan is dead and cannot speak for himself. Others seem more than willing to speak for him and to marvel at the mystery of a background that culminated in a death among the bad guys. If he died among the radicals, must he not have been a radical himself?

But as I read the story, I kept wondering why none of the tale-tellers were willing to acknowledge that a medical aficionado is more than capable of recognizing that blood is red, whoever spills it. Is a wound or death a matter of politics or a matter of fact? Maybe the blood attracted the healer as a primary matter ... and the politics was a sideshow.

-- LOOSING THE NOOSE OF STUDENT DEBT

An activist group in the United States has been carrying out deeds that some might think the stuff of dreams - buying and cancelling other people's student debts.
Rolling Jubilee has purchased and abolished $3.8m (£2.35m) of debt owed by 2,700 students, paying just over $100,000 (£62,000), or as it says, "pennies on the dollar".

Bit by bit, as I feel it, the liberal argument for a college education is eroded. With or without a college degree, hunger is hunger and peasants are peasants. The ethereal wonders of an education -- which deserve some consideration -- lose increasing steam as those with money rake in still more. Colleges turn into trade schools ... which improves the 'bottom line,' of which a college education is largely bereft.

Oh well, the growing popularity of perpetual war may help to right the boat scrumptious inequality ... but not before a lot of blood is spilled.
Posted by genkaku at 10:40 AM