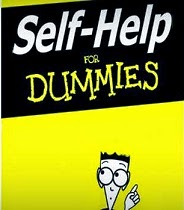 Waiting in a medical lab office yesterday, I was, of course, reduced to reading magazines that were six months or a year old. Like anyone else, I suppose, I wasn't really offended by the lack of timeliness: What I was reading was just better than the flat-screen TV whose muted conversations passed for timely commentary ... war, sickness, famine, skate-boarding, education and all of it presented by women with long hair and comely thighs and impossibly straight teeth.

Look at any religion or war or good deed or diet ... there was always something else to achieve and the self-help market -- from political endeavor to ending poverty -- was endless-endless-ENDLESS.

This observation did not suggest to me that improvements should not be attempted. Chucking the whole thing was a little too cynical and, in the end, unsatisfying, but what also occurred to me was this:

The matter of improvement was sometimes inspiring: It asked the question, "What if things were better?" and then formulated a plan of attack... endlessly. Sometimes the plan worked. Sometimes not. Usually, it turned out to be a mix -- some success and some failure.

It's not a matter of either/or. Lazy and energetic are not enemies. It's just a matter of honestly assessing the furrow anyone might choose to plow. Expectations are OK, right up to the moment when they disperse like woodsmoke ... and, well, the fire is still toasty, isn't it?
Posted by genkaku at 5:22 AM