In Great Britain, a nation that can credit itself for its level of civilization, poor children may be promised a state education, but the fees attendant on that education can leave some feeling excluded and stigmatized. 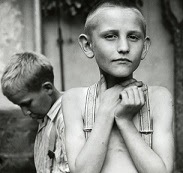 But the Brits seem to be less overtly calloused than the Swiss, who, until not so long ago, simply kidnapped children from poor families and placed them as indentured servants on farms.


Thousands of people in Switzerland who were forced into child labour are demanding compensation for their stolen childhoods. Since the 1850s hundreds of thousands of Swiss children were taken from their parents and sent to farms to work - a practice that continued well into the 20th Century.

These bits of news, spliced into today's important tales of well-stocked wars, hardly speak well of the education received by those shaping and prosecuting national policies ... the ones to whom, perhaps, the homey-nugget of wisdom might aptly be applied: "Spare the rod and spoil the child."

Yes, yes ... "we're doing our best," but every now and then a tart voice reaches out in 'civilized' settings and suggests, "Do better!"
Posted by genkaku at 4:33 AM