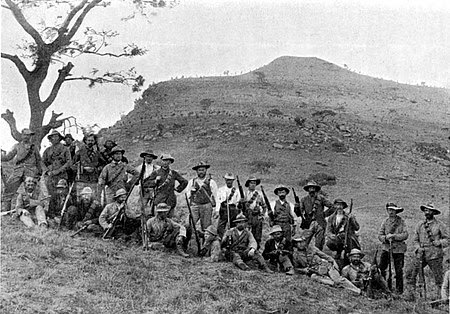 "Rags of Glory," a historical novel by Stuart Cloete I pulled off a dusty shelf here, is focused on the time of the Second Boer War in South Africa. Does anyone know what the Boer War was or the time in which it occurred?

Wars are all pretty much the same, but each is served with sauces of the time -- sauces that are tasty and relevant to some or flat and 'history' to others.

I found myself admiring the brevity of and the flavors of the following paragraphs... a matrix or backdrop of my self, though I had not yet been born, nor even born in England:


August 1899, two years after the Queen's Jubilee, was the height of Britain's power, its very apogee. (The only other great powers were France, Germany and Russia.)

But times were changing. Not merely in new armaments. The "week-end" had come in. African  gold and diamond magnates had set up establishments of unbelievable grandeur in Park Lane. Some of them were Jews. People from Egypt. A vulgarizing process had begun. Bicycles were the rage. Women, the "new women," rode them shamelessly in bloomers.

This was the time of Oscar Wilde, Huxley, Milais, Leighton, Burke-Jones, Kipling, Pushkin, Arnold, Morris, Landseer, Tod Sloan, Sigmund Freud, Buffalo Bill, Swinburne, and Darwin. All were alive or newly dead, their influence a living thing in this society, which, having reached its maturity, was about to begin its slow decline. From empire to commonwealth. The common man and the black man would come into their own in Turnbull's lifetime. Czars, kaisers, sultans, kings, and rajahs would topple like ninepins from their thrones. Pomp, ceremony and manners would be lost in the chaos of equality. There would be great social gains, but these had to be balanced against the losses. There were already some motorcars, electric lights, telephones, none of them very efficient yet, but there, and improving daily....

This was a period of snobbery, extravagance, and immense wealth. The gentleman, the horse, and the common sparrow still lived in symbiotic association.