all middle and no side 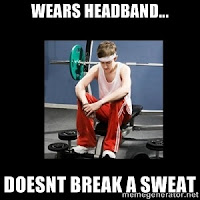 Not "WH-ooosh" but "oooosh" -- that was the nature of the rain that fell in this morning's predawn darkness ... fat and strong and positively everywhere ... in every direction there was nothing but the middle of it. I guess that's the nature of everything, but it's hard not to fantasize that there is a beginning and end to things, that there is an accomplishment or an escape or an excuse somewhere out there.

Where do you go when there is nothing but the middle? Of course the "middle" means the edges, but what happens where that meaning is erased and everything is just, somehow, the middle ... the oooosh of the moment?

Through this guzzling, dolloping rain, Tracy arrived with the newspaper at 5:49. I stood in the porch doorway to greet and thank her and receive her delivery. She tossed newspapers on various stoops and stood in the middle without ever worrying about the "middle" or the "oooosh." Tracy is a plump woman in her late forties or early fifties ... delivering newspapers in an economy said to be on the upswing.

I admire Tracy and people like her -- the ones who actually break a sweat on behalf of those whose only sweat involves trying to cement a lifestyle in which they won't have to break a sweat. For every man or woman who sits down to a second latte of the morning, idly perusing an iPad or other bit of electronic "connectedness," there is someone who must literally break a sweat and does so unnoticed, even by themselves. Theirs is a middle like anyone else's but at the end of the day, they have actually accomplished something, as in delivering the newspaper.

It is too much to praise the 'working class' or some similar segment of social life. And yet, for me, to let the sweat-breakers go unnoticed isn't quite right either. Yes, the upstairs-downstairs dichotomy makes for yet another British recollection, but aside from that, I admire those who break a literal sweat so that, among other things, others may speak in dulcet and well-modulated tones. At least the sweat-breakers may have a loaf of bread to show for it.

That and, perhaps, something like honor.
Posted by genkaku at 7:14 AM