"Life is too short to learn German" 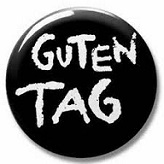 "Life is too short to learn German."

I had never been aware of the quote but appreciate its wit, which is used to set off a Reuters correspondent's feature about immigrants who need to -- but are not always constrained to -- learn German in Germany where the economy is fat.

Strange how handicapped Americans are when it comes to knowing foreign languages ... and consequently, without really being aware of it, how arrogant in their ignorance. I was fortunate to have gone to what was then called the Army Language School to learn -- ick -- German.

Tocqueville was right: America is defended by two oceans. He neglected, to the best of my recollection, to note that America was similarly hemmed in.
Posted by genkaku at 3:12 PM