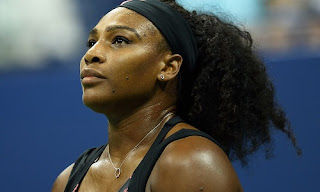 Last night Williams went onto television's U.S. Open court to face Vitalia Diatchenko, a Russian ranked 86th to Williams' No. 1. Diachenko bowed out after 21 minutes of playing time. She claimed an injury, but from the get-go, Daichenko's playing was so amateurish as to ask the question why she was there in the first place. The announcers had to buck and shuffle in order not to scoff ... this was, after all a world-class event and anything less reflected badly on the importance they were paid to bring to the game. The announcers tried ... and failed.

I am not a tennis or any other sort of sports aficionado. But I do enjoy excellence and I was intrigued by the match: How would a world champion face off, not against someone who would give her a run for her athletic money, but against someone so indubitably impoverished by comparison? How would the queen of all the known universe act and react? How would she treat the least of her subjects?

The queen played. That is what she does and she did it. True, it felt as if, occasionally, she was dragged into Daichenko's realm of weakness -- double faulting because, well, what the hell? -- but in general the  queen played. She kept her eyes cast down. She had come to play. This was this and she would demean neither her opponent nor herself... a real warrior.

I can see why people like and perhaps adore sports. There is no pussy-footing, no nuance, no side ... make a move and the move is it and that's all there is to it. I love nuance in its time, but in sport, the lesson is driven home ... there is no other choice ... ever ... THIS IS IT! Plain as salt. There is no sidestepping responsibility or factuality. There is no going back. There is no ... no ... no anything. This is it. There is no honor or defeat, no kudos.

What king or queen summons the courage to step into this arena that cannot be avoided and yet is so hard to enter?

With winning or losing in the rearview mirror ... what is that like? I am somewhat ashamed to praise someone I don't know and yet feel constrained and delighted to do so: Serena Williams for queen!

Queen of the silence. Queen of the is. Queen to all and sundry. Queen without a crown. Strong and dignified without strength or dignity.