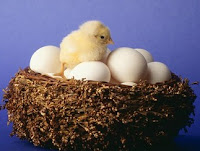 When I first arrived in what was then called the Army Language School in Monterey, Calif., in 1962, it seemed utterly impossible that I could really be fluent in a brand new language, in my case, German. Language is vast and I did not feel vast at all, despite whatever facility and interest I had had in learning languages in the past. My ignorance made the prospect of actually tucking German under my belt seem ridiculous and insurmountable: I knew a couple of German words and expressions, but otherwise had command of precisely squat. Six months later, it was a different matter.

This recollection crossed my mind this morning when I considered the poor bastard trying to learn English, which is a pisscutter of a language -- full of irregularities of pronunciation and meaning and confounding with a capital C. Looking back at my language school training, I do wish I had taken a "hard" language like Arabic or Chinese or even Russian. The school was first-class and it was a pity to have 'wasted' time on something as comparatively easy as German. But ... well, all that's so far in the past that the facility I once had is now almost entirely forgotten, literally. When I once mentioned this maw of forgetfulness to my friend Bill McKechnie, he was upbeat: "All you've got to do is revisit Germany, get drunk three times, and you'll remember all of it," he said.

This entire trickle of thought came up as I considered the phrase, "in the clutch," an old-time-expression used to designate times when the going got tough and a good friend might stand by you and see you through. Good friends were the ones whose allegiance was unwavering, even when the shit hit the fan. They were with you "in the clutch."

"Clutch" as a verb means to hold tight-tight-tighter.

But "clutch" as a noun refers to a position on the car's gear shift when the motor is not engaged. It is a rest period between first or second or third gears. A car can be running and yet it will not go anywhere if the clutch is depressed. For those who any longer know how to drive a stick-shift vehicle, use of the clutch (which allows you to go nowhere) is the prerequisite of going somewhere. So, in one sense, a "clutch" suggests rest and non-involvement -- the reverse of holding something tight-tight-tighter.

Friends who stick with you "in the clutch" are the ones willing to stand at your side in opposing winds.

But I wonder if it might not be a bit confusing ... seeking out friends who might stick with you when nothing special is afoot, when pro or con have not yet been engaged ... and if "in the clutch" might also designate a time of no difficulty... A friend who is at your side when days are hot, the beer is cold and the backyard hammock beckons... something like that.

None of this amounts to even a tempest in a teapot, but this morning I felt sort of sorry for anyone learning English ... or trying to decipher my own.