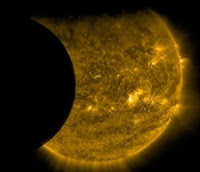 SALT LAKE CITY (AP) — A rare confluence of a lunar eclipse and a supermoon set to happen this weekend has prompted such widespread fear of an impending apocalypse that the Mormon Church was compelled to issue a statement cautioning the faithful to not get caught up in speculation about a major calamity.
Sunday night's "blood moon" and recent natural disasters and political unrest around the world have led to a rise in sales at emergency preparedness retailers. Apocalyptic statements by a Mormon author have only heightened fears among a small number of Mormon followers about the looming end of time. The eclipse will give the moon a red tint and make it look larger than usual. It won't happen again for 18 years.
It's unclear how many Latter-day Saints buy the theory, but Mormon leaders were worried enough that they took the rare step this week of issuing a public statement cautioning the faithful not to get carried away with visions of the apocalypse.