sell drugs, get a college education 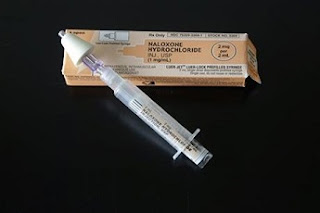 In one sense, I suppose, it's kind of nice to think that the world's drug cartels are financing some of the college educations so prevalent in my neck of the woods. The cartels, whether in Afghanistan, Mexico or Colombia, are not composed of altruists and the innocent and guilty blood that follows in their wake is both cruel and huge. Like Donald Trump, their credo is, "your weakness is my gain" ... and the gains are huge.

How this dovetails with little freckle-faced Johnny or Sally attending one or another of the institutions of higher learning in the Pioneer Valley where I live was brought home to me yesterday when an Associated Press story detailed the purchase by grade schools, high schools and, I imagined, colleges, of an opiod overdose antidote ... the fast-acting naloxone.

I mentioned this story to my younger son, who does a bit of hanging around with students at the University of Massachusetts and Amherst College, both located six or eight miles away. His face screwed up into a twenty-something grimace of certainty: "What a bunch of assholes," he opined as if that were the beginning and end of the topic. People who used heroin simply because it was cheap and available were not people he was willing to hang around with. As a parent, I was relieved.

But then the conversation trailed off into 'lesser' drugs -- cocaine and marijuana and the like. As usual, the greatest addictive drug problem -- alcohol -- went unmentioned. These 'lesser' drugs were clearly not so bad in his oh-so-certain lexicon. And then he got around to acquaintances who peddled drugs on campus ... and how much money they made. I didn't press or probe of seek out details, but one fellow, by my son's word, made $10,000 in a month while another scored $40,000 over a similar time span. "He's paying for his college education," my son said of one such peddler.

The amounts caught my attention. That's a lot of money. Even subtracting for the self-important inflation that criminals may attribute to their deeds ... that's a lot of money -- enough to cover many of the bills a star-spangled America attaches to a "college education," the kind of education that can turn out Donald Trumps.

The trouble with the tales of those whose crimes escaped detection and retribution is that the details go begging. Yes, there is something slick about "getting away with it," but there is a price to pay. A friend of mine -- a one-time hippie who made a lot of money selling drugs on the west coast before becoming a Zen priest -- told me that the life of someone selling illicit drugs may be lucrative, but it is also jam-packed with paranoia. Every knock on the door, every new acquaintance, every pedestrian or blue Chevy that seems to shadow your moves, every second of every day is fraught with the fear that you might get caught and spend a very long time in prison. Such fear, aside from interfering with sleep rhythms, can lead to bloodshed that is both literal and metaphorical.

But hey -- the kid's getting a college education, right?

The details of drug dealing generally focus on the individuals and families that are shattered. And as the offspring of a single mother who was an alcoholic and a pill-popper, I am sympathetic to the enraging sorrows and angry conclusions that allow my son to be at least partly right when he calls drug-users "assholes."

But as I pointed out to my son, "everybody commits suicide in his or her own way." This is not to excuse or condone drug dealing. It is to wonder how the rest of us were lucky enough not to have walked that road, finding solace in some powder or pill when life seemed to be moving too slowly or too fast, but in any event was strangely under- or over-whelming.

I suspect, but don't know, that there simply is no moral high ground. (The higher the ground, the greater the nose bleed.) There is simply the question of who anyone might like to see in the bathroom mirror.