in the wispy world 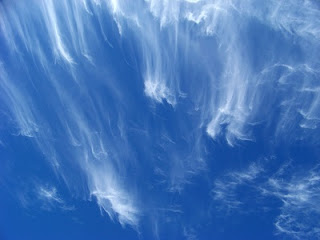 This morning, in the wispy world between consecutive thought and remaining dreams....

-- I dreamed I found my footprint in the snow. The snow was perhaps an inch deep, with a small layer of slush below the whiteness above. I knew to a certainty it was my footprint because somehow the snow detailed the upper part of the foot. The size and sinuousness were mine as were the faint grooves along the nails. Yes, for sure, it was my footprint in the snow, but I had no memory or explanation of how it had gotten there... no memory of the cold that must have been, nor any goal that footprint had set out to achieve.

-- In Capri, at an outdoor cafe that sat on a cliff and overlooked the Adriatic Sea below, my mother encouraged me to go to a nearby table and ask Walt Disney for his autograph. I was 11 at the time and I staunchly, if politely, refused. I knew who Walt Disney was, but saw no reason to bother him or intrude or beg. What would I do with the autograph if I had it? But more important, I was in the process of building interior fortifications whose premise was that if I made myself small enough and silent enough, the world of adults would find no reason to remind me of my unsatisfactoriness. Childhood was not a time when I was overwhelmed with support, with reminders of how I was right and excellent and satisfactory. The sense of being unsatisfactory was painful, but I could find no remedy for it short of being as invisible as possible. Something within me rebelled at the ways in which I felt as if I were being used instead of loved. I might be unsatisfactory, but I was not about to add to that load if I could help it. And so I internalized the unsatisfactoriness yardstick ... nothing was ever quite good enough ... until a brief moment yesterday.

-- Yesterday, I was chatting on the phone with the fellow who had managed my mother's affairs in the years before her death. Gideon and I came out of some of the same tapestry of the past, so, besides talking my mother's business over the years, we also became chums with some shared background. And yesterday, in recapping some of the facets of my mother's death and the wrinkles of her affairs that had been and remained to be smoothed, Gideon mentioned with a kind of d'oh tone of voice that everyone in his elder-care office had come to consider me an honest and honorable person. Gideon and I know each other well enough so that there is little or no reason for idle, ass-kissing praise. So I felt a bit as if I had been struck by lightning. Here (rightly or wrongly) was something I could believe and I really did delight in believing it. The lifetime habit of unsatisfactoriness washed out to sea for a moment and I had attained what I wanted to attain even if what it was I wanted to attain was not entirely clear ... yes, honesty and honor were two things I did consider satisfactory ... even if they turned out to be unsatisfactory. Here was a place I was willing to place my bet without a backward glance. The feeling was as delightful as the imprinted snow must have been cold. Satisfactory ... imagine that. I was never trained up to rely on the accolades of others or to pat myself on the back, but this reminder from the outside managed to break some mold ... and I could relax and even smile.

Naturally, it's gone now. Gone, but not quite forgotten.
Posted by genkaku at 8:41 AM