bang for your buck 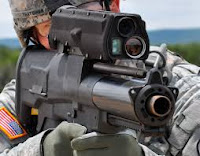 At $35,000 per weapon and $55 per round, the XM25 "smart grenade launcher" is slated for renewed testing by the U.S. Army early next year. How the weapons industry managed to flog this weapon on the BBC beats the hell out of me, but the article seems to offer a small window on what the local tax dollar buys. You just know you'd want one of these babies if you were in combat.

The XM25 "smart grenade launcher" lets combatants set its ammunition to explode when it reaches a set distance.
It means a grenade can be set to go off just after it passes through a window or is just over the target's head, without having struck an object.
One expert called it "revolutionary" but warned there were risks involved.

With an effective airburst range of about 700 meters (2,296.59 feet), there are obvious advantages for the shooter who is not forced into close proximity with his or her target. But...

"It is by nature quite indiscriminate - you can't see behind the cover of what you are trying to shoot behind.
"Yes, you can shoot the grenades behind windows, for example, but you'd have to be very, very sure that [the target aside] there was no-one else in the room."

Women and children, beware! "Collateral damage" is the phrase used to cover that about which we, the taxpayers who make such weapons possible, cover our tracks and ease our conscience.

And you thought there was a diminishing bang for your buck.