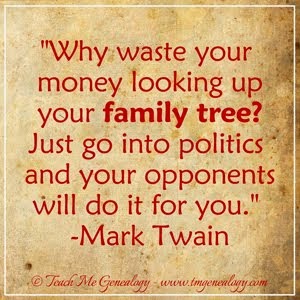 My sister and a couple of cousins are fans of genealogy -- the collecting of data on those who came before and eventually spat out something called "me." And it is sort of neat, knowing there was a pirate or some juicy character back in the way-back. But my interest is sort of in the same ballpark as an interest in sports or comic books ... it's fun, but in the end there is not much "there" there, at least for me.

What I miss in genealogical collations is the person-dom of the one whose deeds and employment and offspring and dwelling place may go under the microscope. What made this person laugh? Did s/he fart under the covers? Who was his or her best friend? What was the worse betrayal ever faced? What secrets did s/he keep? What contradictions -- some of them wracking -- did s/he exercise every day? Did s/he memorize poetry and if so why? What made him/her soar?

Obviously I am asking impossible questions, but I can't help asking them. I like juicy and warming and horrifying in ways that inspire me to think, "me too" or "get thee behind me, Satan!" If it cannot be done in the present, there's no reason to expect it to be possible in the past.

Still, I am skeptical of knowing about a person just because I learn a height, weight or dwelling place. Who was this person really? And genealogical research, while fun, strikes me as a tool that is over-estimated and self-serving: Just imagine if you were written off as your job or religion or sports enthusiasm or parental status. How cock-eyed is that?

All of this sends me, associatively, to the word "gizzard," a delicious word to say and a function to admire. Does anyone know what a gizzard is any more? In a variety of animals -- I think of chickens -- the gizzard is a muscle containing a sack filled with pebbles or grit that masticates swallowed food and transmits it to the stomach for nourishment. Chickens have no teeth. Instead, they have gizzards.

When I was a kid at boarding school, everyone would fall out when it was time to slaughter chickens. The kids were not required to chop off the chicken's head -- assuming they were as squeamish as I about delivering the death blow -- but everyone was required to pluck the resulting carcasses, which would be dipped in a vat of boiling paraffin to ease the plucking process. The chicken was due to be served at some future date: What you plucked is what you ate. And in the process, you had to remove the innards -- heart, liver, gizzard and various other guts. It was a messy business ... nobody liked chicken-plucking day.

The kids learned how to handle the gizzard, which was about as big around as a silver dollar. Using the jack knives everyone carried, we learned to cut carefully along the perimeter and remove the greenish sack filled with stones that lay within. Failure to remove this sack would result in a bitter mouthful at the dinner table.

The gizzard -- purveyor of what brought nourishment to a creature whose nourishment was being redirected to the dinner table. The gizzard -- creating the essence and support factors of life and being. The gizzard -- by one measure, the essence of genealogy, the underpinning of what transmuted "this" to "that," the descriptor on whose shoulders the responsibility and definition of life rested. The nourishment emanated from the gizzard but could the gizzard be fairly tasked with a completely-satisfactory description of the life that eventually spat "me" out?

I have never really understood the smug assurance with which anyone might say, "blood is thicker than water," as if family and forbears could explain or excuse the actions of the present. Certainly there is some connection to the circumstances into which anyone is born, but to suggest that "blood" was the determinant or the most important thing? ... it won't wash ... at least for me.

It still doesn't tell me if the chicken farted under the covers. And just because "it's the best we've got" is no reason not to ask the impossible questions. Agreement is nice, but it can hardly be construed as the truth.

Hell, I don't even know if chickens fart.