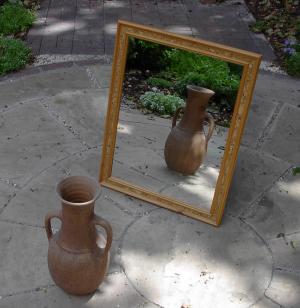 Of all the things that frighten me, perhaps the most sharp-edged is the enfolding notion that I might somehow be entitled to one thing or another. Former U.S. President George Bush was once described by a detractor as a man "who was born on third base and imagined he had hit a triple." Ouch! ... only I doubt he sees things that way.

Entitlement is such an alluring realm, not least when those in the neighborhood feel likewise entitled or are compelled by blindness to do a lot of insouciant damage before they are willing to look in the mirror ... if they ever do.

But the realm of entitlement has a mirror image as well -- the realm in which the owner is somehow not entitled ... to looks or wealth or power or station or intelligence or ownership or whatever. These are people, sometimes, who imagine that if they give away their worldly goods and simplify their lives and shuffle abjectly from here to there that they can somehow escape the scourge of entitlement.

The one side of the coin is not so very different from the other. Just because you own something doesn't mean you own it. But just because you don't own it doesn't mean you are free from it either. And it is no good trying to morally man-handle the situation into compliance -- to recognize the presumptuousness of ownership and thus elude its lash.

These days, there is a social undercurrent that suggests "I am entitled to my opinion," but the important question remains unaddressed and unanswered: "Who says so?"
Posted by genkaku at 9:16 AM