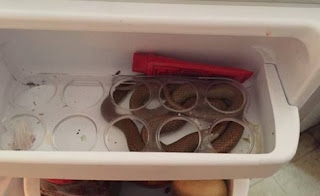 And you thought you had problems....

Alice Springs snake handlers are being run off their feet after an outbreak of the slithery serpents, which have invaded homes in "huge numbers" during a burst of warm night-time weather, including one that ended up in a household fridge.
"They have come out in huge numbers, all in a big rush," said Rex Neindorf, the director at the Alice Springs Reptile Centre.

As an addendum, the story notes, "About 90 per cent of snakes found in people's homes in Alice Springs are venomous, and they can be attracted to refrigerators."

It gives the whole notion of a "midnight snack" new zest.