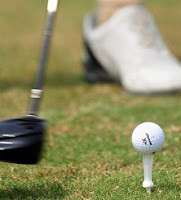 The Chinese Communist Party has banned all 88 million of its members from joining golf clubs, in its latest update of party discipline rules.
Extravagant eating and drinking, and abuse of power, are also formally banned, said Xinhua news agency.

Talk about misdirection! Let's concentrate on the lordly perks and ignore the systemic issues that nourish corruption in any large group. I wonder to what extent the Chinese people buy into this nonsense. Isn't it all a bit like complaining about U.S. bankers' and stock brokers' juicy year-end compensation envelopes while ignoring the cogs and wheels that allow a continued and continuing wheeling and dealing?

Talk about dying and going to hell!

And as if that weren't enough, "The Communist Party has also rephrased a previous clause banning adultery and mistresses."