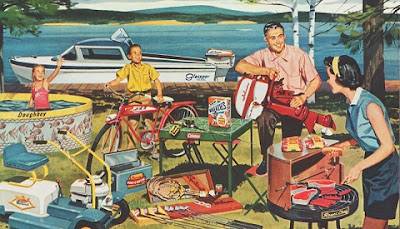 Soaking up the alpha waves of a local public broadcast TV show last night, I found myself somehow sucked without rejoinder into a realm of what I can only think of as "innocence." The show spliced together bits and pieces of home movies taken during the middle to late 1950's. And there were intermittent comments by those who had lived through those times and still lived. Their comments were often attended with rueful or wishful smiles: They seemed to long for a return to such times and yet now were too savvy not to doubt them.

No questions, no doubts filled my mind for a few minutes. Innocence is so ... innocent.

The film clips showed family gatherings, guys in ties, women in crinolines and impossibly pointy brassieres and curlers to sleep with through the night. There was the growth of suburbia and the wonder of a television set around which families would gather. Guys liked cars. Girls bought clothes. Downtown Springfield, the Massachusetts community in focus, was awash in one shop next to another next to another on Main Street. Malls were not yet. The houses in suburbia were much the same, one to the next. Home films were filled with obligatory and perhaps real laughter and small bits of swing-on-the-swing fun. Everyone was incredibly clean and, mostly, white.

I let it all slide by on the television and was touched by the innocence: It was as if with a child: Don't ask if it is false -- enjoy the truth of this true truth. World War II and its wracking sorrows was in the rearview mirror ... this was neat and clean and relaxing. There were bad girls who went "all the way" and good girls who didn't. Who would not nest and rest and polish hub caps after the muck and mire and loss of a terrible war?

For a few minutes, I made no contrasts and asked no questions. I could feel it all and enjoy what it was and felt blessed to be innocent. Time enough to acknowledge blind spots and idiocies. The sweetness, for a few minutes, was sweet and touching and utterly human.