when naked is not enough 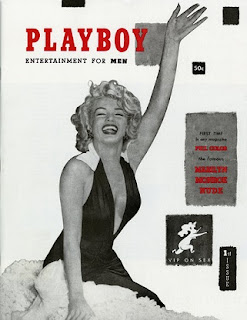 OK, so it's another nail in my you're-getting-old coffin: Playboy magazine has decided to delete pictures of nude women starting next March according to The New York Times.

“That battle has been fought and won,” said Scott Flanders, the company’s chief executive. “You’re now one click away from every sex act imaginable for free. And so it’s just passé at this juncture.”

How wonderfully in-your-face the nudie pix were in their time! And now, like nudity itself, there is something redundant about it all. That's right, folks, we're all nude under the clothes and the variations in revelation are strikingly few. As some Zen Buddhist teacher put it once when asked about sex and spiritual endeavor, "It's just penises and vaginas, isn't it?"

Having been convinced for a long time that "sexy" was better defined by what you don't see than what you do, I feel vindicated in some sense. On the other hand, the naughty-ness quotient was so scrumptious that it's sad to see the nudies go. Yes, ladies, the male stash of raucous hormones is not always even-tempered and equality-driven.

And, when you think about it, the idea that a naked body is all there is to nakedness is an overstatement by any honest measuring stick.