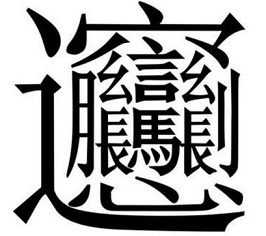 A professor in China has invented a taxing new way of preventing students from turning up late for his classes.
Wang Sijun, who teaches at a university in Sichuan province, has been giving tardy students a complex character to write out on paper 1,000 times.
The Chinese character for "biang", is made up of 56 pen strokes.
The word holds no meaning but local media said Mr Wang drew inspiration for it from the name of a noodle dish he had while visiting Shaanxi province.

The two students so far penalized in this way were so overwhelmed that they begged the professor for an alternative mercy...

Talk about a "core curriculum.

I wonder if this has any linkage with China's reversal of its one-child per family policy.
Posted by genkaku at 7:32 AM