elderly thief sticks with what she knows best 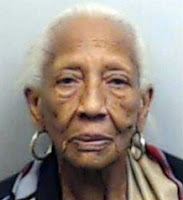 "ATLANTA –  Ten years ago, when she was 75 years old, Doris Payne swore she was done with a lifetime of pilfering jewels across two continents. Several arrests later, in 2013, she said again that she was leaving that life behind.

"Police say Payne, now 85, is at it again: She was recently arrested and charged with pocketing a $690 pair of earrings from a Saks Fifth Avenue department store at a mall in Atlanta's upscale Buckhead neighborhood."