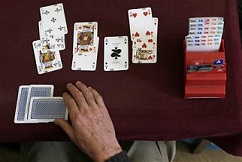 LONDON (AP) -- Legions of bridge players in Britain may feel they've been dealt a rotten hand after a court decision endorsed an earlier ruling that the popular card game is not a sport....
The decision will affect possible lottery funding for bridge tournaments.
Advocates for bridge had claimed that Parliament recognizes "mind sports" that build mental acuity.
Disheartened bridge advocates say the "old fashioned" definition means that model airplane flying is viewed as a sport while bridge is not.

Not least, the decision was based on whether a sports enthusiast breaks a palpable sweat.


How unfair life can be.

And how much simpler to browse and enjoy and ponder the story of a card game at the expense of what might be called serious news, as for example this Associated Press brief (awaiting updates, perhaps, but run nonetheless minus explanation) about an "erroneous" claim feeding the fires of conflict between Palestinians and Israelis.


JERUSALEM (AP) [Oct 15, 6:22 AM (ET)] — An erroneous claim by Mahmoud Abbas that a 13-year-old Palestinian boy was killed by Israelis has fueled new Israeli allegations that the Palestinian leader is inciting to violence.

Perhaps I haven't had enough morning coffee, but the story does not detail by what yardstick the claim was in fact adjudged erroneous... or the no-doubt counter-claim that it was not erroneous. To my mind, this is a serious matter because people are in the process of dying as a result of such agitation-propaganda.


But in the midst of all this, I realized that I did not have the energy to sink once again into serious news, serious oversight, serious elevation of mediocrity in news reporting. I'd rather read about bridge. My energies have been trumped by the onslaught of half-baked news-gathering and presentation.

Excellence ... just wait a while and someone is bound to fashion a cheap knock-off, something that looks and sounds consequential and fine but is, in reality, a misuse of the powers accorded to the agency offering the knock-off.

It's cruel and it's infuriating but cruelty and infuriation require energy and a capacity to expend that energy. Even an excellent tale leaves loose ends, so loose-ends become the acceptable yardstick.

PS. Here, be it said, is the follow-up AP story, which is more fulsome, but does not allay my original questions. Is there some excuse for running an inflammatory half-baked story in the first place?