the Donald Trump of Israel


Israeli Prime Minister Benjamin Netanyahu provoked controversy on Wednesday, hours before a visit to Germany, by saying the former Muslim elder in Jerusalem convinced Adolf Hitler to exterminate the Jews.

The rest of the world may claim to be worried by one reckless state after another possessing nuclear weapons, but I wonder that no one seems to list Israel in a similar corral with North Korea, Pakistan and whoever all else thinks that big weapons are a get-out-of-jail-free card for a big and reckless mouth.

Everyone -- media, talking heads, academics, etc. -- seems so ginger and polite when Netanyahu comes up with his latest Donald Trump-ism. Why? Day in and day out, Muslims (and Palestinians by extension) are squeezed and degraded under Israel's superior-might rule ... and yet for every five stories about an Israeli stabbed and several retributive slayings by a righteous Israel, there is barely a brief about the houses taken, families displaced, jobs withheld, travel restrictions imposed ... the apartheid that is a reality. 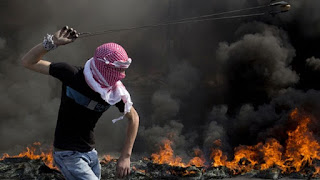 Every photo op I see shows Israelis in body armor and carrying automatic weapons and backed by armored vehicles, while the best a photographer can come up with for the 'terrorists' is a guy with a knife or a rock or a Molotov cocktail. Here's a small example of the imbalances at play.

Isn't it time to call this nitwit out? Sure, he can get away with it ... in the same way that Donald Trump can get away with his ill-conceived assertions. Politicians get in the first licks and it is up to the rest of us to clean up and clear up the subsequent mess. But is this government, let alone good government?

Arabs have their texts that call for the eradication of non-believers, Israelis included. But so do the Jews, though as I understand it, the text (which I am too lazy to look up) is not widely promulgated in the obedient-dog West. In the United States, even by the most generous count, there are something like six million Jews in a country of 319 million people. And yet this tail has the capacity to wag the dog, not least with its perennial counter-point "anti-Semitic" defense used on all those seeking a reasonable account. Let me see ... a nuclear armed Israel barks in tandem with the United States at an Iran that has no such weapons because Iran might -- though not any time soon -- be armed in a similar way and Iran has no love for lovable little Israel.

Anti-Semitic, my ass! Here is a man, the son of an historian, claiming that a Muslim leader put the idea of the "final solution" into Hitler's head. Ergo the Holocaust. Ergo Muslims (and by extension, Palestinians) are responsible for the Holocaust. It is unspeakably self-serving and corrupt. Oh, and did I mention that it's also untrue?

If Netanyahu can dream, I figure I can too.

PS. And here's a bit of Netanyahu's dream scape.
Posted by genkaku at 9:36 AM